Thank you for coming to my Blog

A Near Perfect Day

When was the last time you had a near perfect ride? Mine was Saturday March 31. The ride, a 200 kilometer, 127 mile event know as a brevet started in Edwardsville, IL near St. Louis. Brevets are self-supported long distance events where you need to make mandatory stops along the way to have a card signed showing your date and time of passage.

Sixteen riders started this event at 7:00 AM. The morning temperatures started in the low 50’s with a light breeze out of the east. We headed northeast along the Quercus Grove trail which is a paved rails-to-trails path which is extensive in this area. We were on this trail for the first three miles or so. By the time we exited onto Fruit Road heading due east the fast group was quickly opening a gap to the point we would never see those riders again.

I rode at the back of the group along with five other riders, Dennis Smith, Scott Thompson, Grover Everett, Charles Witsman and Robert Lundt. After ten miles Scott and Robert had opened up a gap of a few hundred yards. Charlie and Grover were just ahead of Dennis and me.

Upon reaching Pocahontas, mile 25 it was time for a short “natural” break” with an average pace of just over 14 mph. So far the pace was light with my heart rate staying in the moderate intensity range. This had been a nice warm up to loosen the legs out for my first long ride of the year. Charlie was having significant foot pain enough that he decided another 100 miles was not in the cards. He decided to head back to Edwardsville.

Scott and Robert headed out before I was ready to roll, but Grover and Dennis and I rolled out five minutes later. After another six miles of eastward riding we headed south along Millersburg Road. Dennis was “in a mood” and feeling good about the weather. Coming down the I-70 overpass he picked up his pace to 25 mph for a short stint. When the rollout finished, Dennis just kept pedaling. Grover and I had to pick our pace up to catch him. A few miles later we could see Scott and Robert up the road. Dennis asked if we wanted to chase and join them. He was serious, but I decided that we would most likely catch them before the first checkpoint in Breese at mile 52. Our pace settled around 18 mph and we did catch Scott and Robert just five miles later along IL-143 before slowing down to a more sustainable pace.

As we headed south on Jamestown Road our little group spit apart once again. With no wind at all heading south our pace picked up and we averaged about 17 mph on this southern section coming into Breese, mile 52.

After having our brevet card signed by the store staff we all headed out pretty much together. Dennis had just downed his fuel of choice, Red Bull and the stuff does give him wings. He picked up his pace for the next ten miles before opening a half mile gap on the rest of us.

My goals for this first event of the year were simple. First was to finish. After that it would great to finish without crying or finishing without wanting to melt my bicycle down into a lawn ornament. I had no aspirations of riding fast (for me) but the weather had warmed into the mid-60s and still there was just a light breeze out of the east.

As we turned east for the ten mile run into Okawville, Dennis still had his half mile gap. Being on a recumbent (you know those rolling Lay-Z-Boy bicycles) I have a bit of advantage into the wind as I am down lower and a bit more aerodynamic. I swung around the other riders and decided to see if I could catch Dennis before Okawville. Over the next ten miles I saw a few cyclists heading back on their return trip. The gap to Dennis closed to about 100 yards as I pulled into the Gas Mart in Okawville, mile 78 with a 16 mph average up to this point.

I assumed Dennis would get his card signed and do a quick turn around and start back north. As I was feeling pretty darn good about my efforts, I joined Dennis as he rolled out heading west along the same stretch of road. Dennis had another Red Bull and took off again for a short stint before settling down to a more reasonable pace. A few miles south of New Baden Grover caught us. I was feeling so good I wanted to keep going, but Dennis wanted to stop in New Baden, mile 92 for a break. Grover kept riding and the duo of Scott and Robert still behind. Another Red Bull for Dennis and we headed north.

I think the pace and Red Bull crash was affecting Dennis as he was slowing down. I opened a half mile gap but knew when we reached the rolling hills along Summerfield Road, Dennis would catch me and that is just what happened. Once we reached the town of Marine around mile 112 we decided to slow the pace down and enjoy the rest of the day.

With a short 15 minute break we were back on the road for the final 15 miles. Scott caught up to us and told us that Robert was another five miles back and not doing well and would likely abandon. Scott took off heading west on Fruit Road. Dennis and I took our time knowing that this ride was in the bag. We pulled into the final checkpoint at the Edwardsville Police Station at 4:52 PM with a sub-10 hour 200K event. Not fighting wind, no rain, no heat above 76 degrees and feeling good all day long made this ride one for the books. While not my fastest 200, it was one of the more fun ones.
Posted by JostRider at 2:09 PM 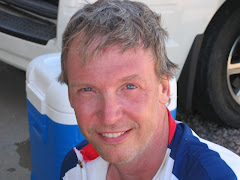 Tired, but still smiling and riding, what a concept.